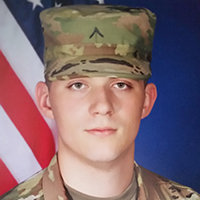 Great Clips general manager Meredith Ripple says she admires the amazing loyalty of her son, Trey. “Loyalty to his country and his family. We are so proud of him.”

Her son describes it this way: “As a kid, I was basically my mother’s model when she needed to have someone demonstrate how to do a particular haircut,” says Trey, now 20. “Before a stylist is hired by a Great Clips salon, they have to show off their haircutting skills, so my mom would often put me in front of them. Let’s just say that sometimes the prospective stylist was hired. And sometimes not.”

Trey’s responsibilities as the child of a salon manager didn’t end with being a haircut model. “When I got into the sixth grade, I was a human directional,” says Trey. “My brother and I would stand out in the fine Texas heat and try to attract as many customers as possible by waving the Great Clips sign. One day a lady came in and said, ‘We saw the boys.’ I thought, wow, we’re actually making an impact on my mother’s business!” Besides the sometimes questionable haircuts and potential heatstroke, Trey soaked up life lessons at Great Clips. “I saw how everyone was able to work together as a team, to reach certain goals. I also learned to respect the chain-of-command structure they have.”

As it turns out, those lessons about deferring to authority, focusing on goals, and working as a team were appropriate foundations for Trey’s current career as an Army military police officer, stationed at Ft. Hood.

How long has Trey wanted to be in the military? All you need to know is that the haircut he longed for as a child was a “high and tight.” Family Easter egg hunts included camouflaged eggs—“which is when I realized how effective camo is,” recalls Meredith. “We were finding those eggs in the grass for months!”

Trey joined ROTC in high school. “I joined as a cadet private and it clicked immediately. I felt like it was a calling. I wanted to serve my country proudly.”

“His father and I are so proud of him,” says Meredith, explaining why she nominated Trey to be recognized as part of Great Clips Veterans Day campaign. “I’ve seen him go from being a regular high school kid to becoming more confident, more organized, and healthier. I see such amazing loyalty in him to his country and his family.”

Meredith works for Great Clips franchisees Jan and Al Dunagan, who own four salons in the San Antonio area. Meredith’s husband, Nathan, is in law enforcement. Trey is the oldest of their three children.

After basic training, Trey pursued an assignment in the Military Police. Tall, with a dry, precise conversational style sprinkled with “Yes, ma’am” and “Well, ma’am,” Trey has a dry sense of humor that’s hard to capture in print. He has a keen eye for detail and an unexpected understanding of the human condition.

“Well, ma’am, I see myself as kind of like a sheepdog. We have to respond to calls during people’s darkest hours, their lowest point of that day. You have to be ready for it. It’s not an easy job; it’s a hard job. It takes guts to deal with the hours and the people you encounter.

“Like yesterday, an 80-year-old woman tried to shoplift 14 make-up products worth $1,894.10 from the base store. She thought she was going to get away with it. I’m 6-foot, 2-inches and 208 pounds. She’s probably 89 pounds and 5 feet tall. I had to transport her to the MP Station. I told her, ‘Ma’am, just follow me, please.’ Her husband is retired military.”

So she was on base because she’s able to do her shopping there? “Yes, ma’am. Until yesterday.”

Not all offenders are as easily handled. Trey acknowledges some soldiers take a dim view of an MP officer’s responsibility to enforce rules, regulations, and laws, and to intervene in personal situations. “Sometimes we have to deal with difficult situations that involve fellow soldiers. But it’s our job. If you don’t have the confidence to do that, it’s going to be a long night for you.”

A history buff, Trey takes Veterans Day seriously. “For someone new in the military, it’s basically showing respect for those who signed up and risked their lives for our values and our way of life—people who have seen some things. The new is respecting the old. We honor those who did their jobs.” 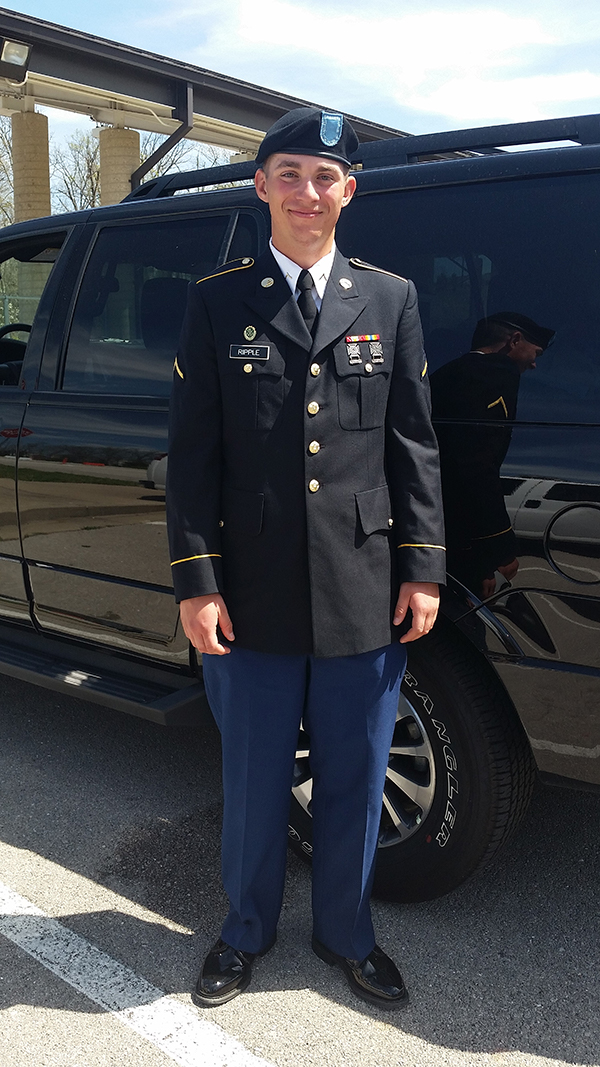 For Trey, his most significant experience so far came at the end of basic training—a right of passage that took place around a bonfire in the woods.

“You march for miles and miles, then you crawl through mud. Then you take off your battle gear and you stand around a bonfire and your drill sergeant hands you your Values tag, with the Warrior Ethos on one side and the seven Army values on the other. It’s a rite of passage.

“It means I earned the right to be a soldier.”