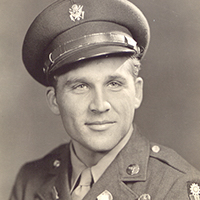 Great Clips franchisee Linda Holmes says her father has led “a fascinating life”—as a soldier, an archeologist, a fingerprint expert, and now as a handyman for her salons.

George Davis was 19 when he enlisted in the U.S. Army Air Corps, trained as a communications specialist—he transcribed Morse Code on a manual typewriter at 30 words a minute—and shipped off to serve in the Pacific theater of World War II in India, China, and Burma. 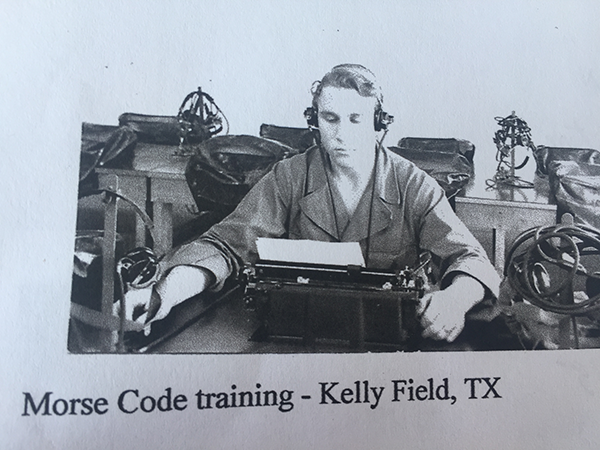 Driven by a duty to serve, his military years also provided training for a lifelong career and the opportunity to see distant and different parts of the world. Just getting to his post north of Calcutta was a journey of 54 days by ship from California to Karachi, then a long train ride across India. Once settled, he was part of the effort to defend the Burma Road, a key supply route for the Allies.

“I took it very seriously,” says Davis. “My job with the radio communications and dispatch was very much needed. I appreciated that I was able to do something for the defense of our country.”

Today, at the age of 94—“I’m still a young ‘un. I won’t be officially old until I turn 95!”—Davis’s travels keep him closer to home where he serves his community in various ways. Perhaps most appreciative of his “service” is his daughter, Linda Holmes, owner of nine Great Clips salons in western Michigan, who nominated him for recognition as part of Great Clips’ Veterans Day celebration.

Whenever Davis needs a haircut, he makes his way to any one of Holmes’s salons, carrying a toolbox. He signs in for a haircut, and, as he waits to be called by the next stylist, he checks out the salon stations for balky drawers, burned-out light bulbs, squeaky chairs, and any other chore that needs doing.

“When I walk in, the salon staff will say, ‘We got somethin’ for you today,’” says Davis. “Yeah, they make me work but I get a free haircut in exchange!”

Holmes says her father has lived a life defined by energy and curiosity. His family moved to Grand Rapids when he was a boy, so his father could pursue work in western Michigan’s oil fields. Those were Dust Bowl days, leaving sandy fields where once there had been topsoil. George, then 13, was out and about on his bike and decided to see how far he could ride in the sand, creating “snake tracks” with his tires. He went 10 or 15 feet before having to jump off, and there in the sand he made a discovery—an arrowhead.

For the next several years, he and his father would go out on weekend and look for arrowheads. That find morphed into a lifelong interest in archaeology—he now has more than 4,000 arrowheads, the largest collection in Michigan. He admits to being an avid collector of many, many things—keys, padlocks, stamps, and coins to name a few. He once sold a basement full of old bottles for enough money to buy a John Deere lawn tractor, which he still has.

After his stint in the military, George returned to Grand Rapids and took a job with a radio and television station, then became a staff photographer for the American Seating Company. He left that job after 20 years to take a position with the police department as a crime scene photographer. In 24 years with the detective bureau, he photographed everything from stolen cars to murder scenes and autopsies.

Davis’s license plate identifies him as a WWII veteran of the China, Burma, and India campaigns. Lately, he’s noticed that more people approach him to thank him for his service and chat. “People are more interested than they were when I first got out. They like to hear the stories. I appreciate that.” 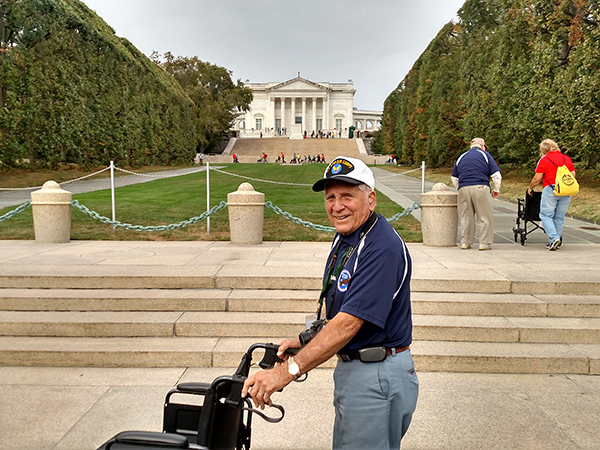 Davis received a much more public recognition in 2015 when he was awarded a Congressional Gold Medal, the highest civilian honor bestowed by Congress in appreciation and recognition of distinguished achievement and contribution. The award was in recognition of his World War II service and 70-plus years as an active member of the Grand Rapids Senior Squadron of the Civil Air Patrol.

When asked about the Medal, Davis humbly replies, “I’m proud of my service, that I did what I think every young person should do to help preserve the freedom of America.”